Despite significant progress on drought physical representation through the improvement of satellite-based indicators, knowledge gaps remain on the link between drought physical assessment and its impacts on societies. This difficulty can be explained by the complexity of the phenomenon which propagates unequally in multiple parts of the hydrological system and creates a wide range of direct and indirect impacts. Also, the nature of those impacts strongly depends on the drought severity, the water management context and water demand of societies and vegetation during the period it occurs.

Online media presents the opportunity to study drought from an impact perspective by giving insights on when and where societies perceive an event and which of the drought impacts are currently felt on the ground. This novel approach presents numerous benefits, such as:

This article describes two use-cases where FloodTags applied online media to detect and monitor droughts. In the first project, we use a Machine Learning framework to extract information on historical drought events from online news articles [1] and evaluated the accuracy of the drought detection [2]. The output of this project contributed to a collaborative project targeting drought impact forecasting in Mali. In the second use-case, we investigated the application of social media platform Twitter to detect and monitor drought in California [2].

Case Study A: Monitoring Critical Developments in the Delta (Mali)

With the majority of the population engaged in subsistence agriculture, Mali is suffering from recurrent water crisis threatening the livelihood and health of its society. To properly prepare and respond to these events, quantitative data on the ground situation are critical. However, the limited amount of weather stations available and the high precipitation gradient, contributes to the difficulty to timely identify drought, thus exacerbating the vulnerability to drought. Furthermore, currently available data from weather stations pose problems regarding its management and sharing between organizations in charge of disaster response.

ObjectivesOnline media present the opportunity to provide an efficient approach to detect and monitor drought in data scarce areas like Mali,  allowing to build the foundations of a drought event database. Currently, most of the disaster database referencing drought in the Sahel region rely on manual input. This limits their usability due to errors and omissions, and their focus on large scale and/or long-lasting events.

Method and ResultsFor the online media analysis, FloodTags automated the extraction of drought-related information found in news articles. Using four online news media sources, FloodTags scanned about 600 000 news articles published between 2009 and 2018. The output of that process is presented as a table representing for each row an event found (see below Table 1). The data include reports of:

Overall, 243 drought event mentions were found in Mali. From those events, 88% reported events at a sub-national level or lower. The remaining are mentions of events at a national level. Also, 76% of the events were reported at a monthly temporal resolution. Overall, 57% included characteristics of the effect of the drought on society and 24% of the events reported factors potentially causing or exacerbating the disaster. Below Figure represents a visualisation of all the events found. 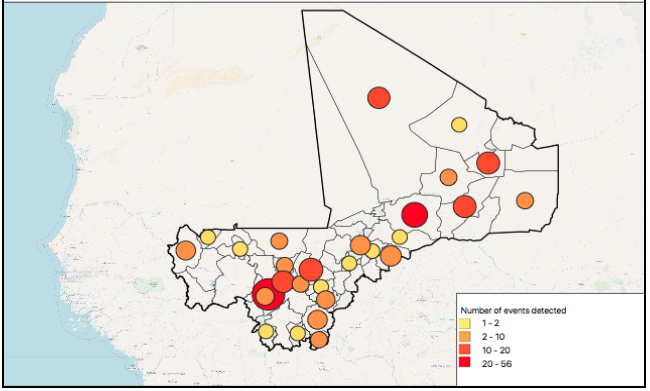 To validate the results obtained from the news articles, the events were compared to Water Storage Deficit (WSD) derived from the GRACE satellites. The indicator was used as a benchmark to the drought physical assessment. This choice was motivated by the opportunity to allow an integrated assessment of each component of the hydrological system. Ultimately, the results were moderately satisfying. The comparison with the WSD showed a high recall and low precision (Table 2). This suggests that although most droughts are identified, numerous false alarms are observed. Three challenges faced explains the low precision. First, we encountered the difficulty to properly match each event to their respective locations and dates within articles mentioning several dates and locations. Secondly, numerous articles showed coarse temporal expressions which would then result in lengthier drought events. Finally, we noticed an underestimation of the droughts durations from our benchmark drought indicator.

Table 2: Skills of the news article-based detection compared to the Water Storage Deficit (WSD) in Mali

Immediate improvement and application areasThis research constitutes the first attempt to detect and monitor drought using online news articles. Although the results presented several shortcomings, future development remains promising. Among on-going improvement, we are aiming to use a machine learning framework to match each event their respective additional details, such dates,  locations and impacts. This upgrade will allow to improve the accuracy of the events reported. Potential application areas include:

Case Study B: Twitter for drought detection and monitoring in California

In recent years, social media drew interest as a possible new source of information on natural disasters such as wildfire, earthquake, floods, winter storms and heavy snowfalls. However, it was never used yet for the detection and monitoring of droughts.

ObjectivesThe study investigated the use of Twitter to detect and monitor drought events and their impacts from a human–centric perspective. For this goal, it is first necessary to understand how tweets relates to the physical parameters of drought. The Water Storage Deficit derived from the GRACE satellites was chosen as a drought indicator, thus, as the reference to the drought physical assessment. This choice was motivated by the opportunity to allow an integrated assessment of each component of the hydrological cycle. Due to the elusiveness of the drought phenomena, and the diverse drivers and impacts it may encompass, a large set of preselected drought-related keywords were monitored and analysed to define which keyword is the most suitable to encompass the drought phenomena. Three keywords categories were reviewed (Table 3): drought identifier, drivers and impacts.

First, the tweets containing drought-related keywords were assigned a location using TAGGS, a geoparsing algorithms that enhances location disambiguation using both metadata and the contextual information of groups of tweets [3]. Then, the tweets were filtered to exclude all tweets that did not mention California or a geographic entity therein. Secondly, a blacklist was created to filter tweets containing the word “drought” in different contexts. Finally, the tweets monthly variations were compared to the GRACE indicator using an F-score.

ResultsThe F-score obtained are displayed in Table 4. The results validating the method was beyond expectation (82%), accounting for 44 months of drought detected by the online media system, where 39 months were confirmed by the referenced drought indicator (Water Storage Deficit).

Table 4: Skills of the tweet-based detection compared to the Water Storage Deficit (WSD) in California (USA) 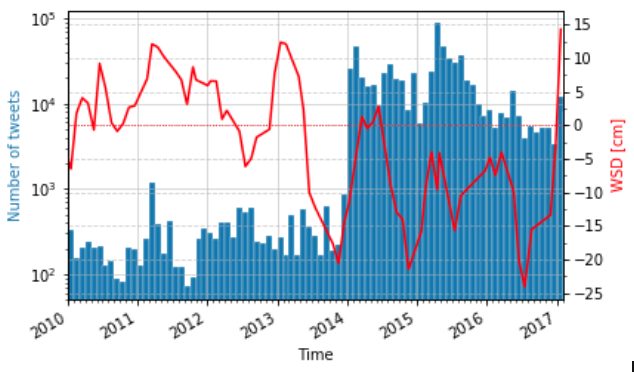 Application areas areThe F-score suggest suitability to use the data for drought monitoring. These results are extremely valuable for the calibration and validation of current drought indicators, especially in the absence of any other from-the-ground data,. Furthermore, the method described in this research could be applied to real-time analysis. This suggests that this research could serve as the basis of building a global drought database able to timely detect drought from an impact perspective without relying on manual inputs nor model assumptions.

By collecting news articles, blogs, forums, Twitter, Facebook public pages, FloodTags uses a state-of-the-art method in Artificial Intelligence to retrieve relevant information on natural disaster from online media. The information collected can then be visualized and analysed from an online dashboard. The data produced can be delivered on regularly and sent out to end-users through direct messaging. Moreover, FloodTags also developed a bot for end-user interaction to collect feedbacks on ongoing disasters. The bot can be used from Telegram, Facebook Messenger and soon WhatsApp.